GREENSBORO, N.C., September 18, 2019 – Piedmont Animal Health Inc., which specializes in developing novel medications that improve compliance and ease of use, today announces the U.S. Patent and Trademark Office has issued a patent for Piedmont’s long-acting sterile injectable formulation containing macrolide antibiotics for use in both companion animals and humans.

Piedmont’s unique formulation enables antibiotics to be administered by injection in-clinic, under the direction of prescribing veterinarians or physicians, thereby eliminating the need for oral administration of antibiotics over several days at home.

Already in late-stage development (pivotal field study), Piedmont anticipates the first product to market to utilize its innovative technology may be an injectable for the treatment of upper respiratory infections in cats.

Improved compliance often means improved health
According to Doug Hepler, Ph.D., chief scientific officer at Piedmont, “Today, veterinarians treating cases of upper respiratory infection will send home an oral antibiotic that requires pet owners to dose their animals once or twice a day for several days. Yet, according to pet owner compliance studies, unfortunately many of those doses won’t be successfully administered to pets. Our ready-to-use subcutaneous injectable would place compliance directly within the control of veterinarians, thus eliminating the challenges that occur when pet owners—particularly those with cats–try to orally dose their pets.” 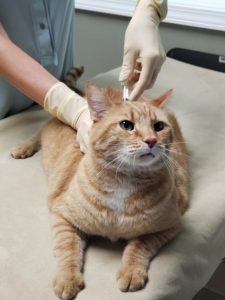 A veterinarian in Greensboro, N.C. administers an injection to a cat on September 17, 2019. Piedmont Animal Health has achieved a U.S. patent for a long-acting injectable antibiotic for use in both companion animals and humans, and cats are likely to be the first beneficiaries.

Piedmont expects this to be the first of many injectables
“We’re seeing a trend among veterinarians towards a preference for injectable medications that can be administered in-clinic,” says Roland Johnson, Piedmont CEO. “For example, in several proprietary market research studies with veterinarians, nearly 100 percent indicated a desire to use injectables.

“In addition to this first product in development, we have successfully formulated a second antibiotic into an injectable formulation which will target multiple diseases in dogs and cats, including urinary tract infections,” Johnson adds. “Our goal is to develop a portfolio of targeted antibiotics for in-clinic administration by veterinarians. All of our products are focused on dramatically improving convenience and compliance.”

About Piedmont Animal Health
Piedmont Animal Health, a Greensboro, N.C.-based company, is led by a team of experienced veterinary pharmaceutical innovators. Piedmont specializes in inventing, developing, and gaining approval by the Food and Drug Administration for medications that are then out-licensed to major pharmaceutical companies for commercialization. For more information, visit PiedmontAnimalHealth.com.